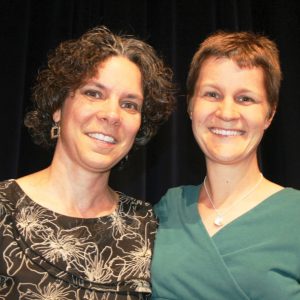 Since the spring of 2006, the Eastern Mennonite High School Science Department has honored an alumnus each year who “exemplifies both a life of service to others consistent with God’s calling and a significant achievement in an area of science.” Past recipients have included doctors, educators, and even a robotics expert currently employed by Google, designing their robotics car. This year, on April 30, Eastern Mennonite High School celebrated the work of Jan Emswiler (‘92) for her work in fighting against HIV/AIDS in Tanzania.

After graduating from EMHS, Emswiler traveled to Tanzania for the first time when she volunteered for SALT (Serving And Learning Together), a program established by the Mennonite Central Committee (MCC). She graduated from Eastern Mennonite University in 1998 with a nursing degree and returned to Tanzania for two years again working for MCC as a community health worker. Emswiler returned to Harrisonburg for one year and was a staff nurse at Oak Lea Nursing Home before returning to Tanzania from 2004 to 2009 to teach advanced nursing at Aga Khan University and to administer a community health program focused on HIV/AIDS.

Emswiler returned in 2009 to Virginia as a Nurse Supervisor at Oak Lea Nursing Home, a Swahili instructor at James Madison University and as the Executive Director of the Valley AIDS Network. Emswiler is currently an Assistant Professor of Nursing at Goshen College, Goshen, Ind.

During her acceptance speech at EMHS, Emswiler said the driving force behind her efforts was a feeling of uneasiness; she was uneasy with the debilitating effects of HIV/AIDS, and the imbalance of power surrounding the disease. “At first, one of my major struggles was working with HIV issues and facing the extreme levels of stigma and discrimination,” Emswiler said. Jan is married to Kajungu Mturi and they have a 5-year-old son, Luga. Jan’s parents are Dave and Ruthie Emswiler of Harrisonburg, Va.