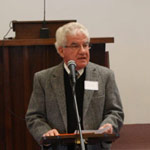 At Virginia Mennonite Conference Winter Delegate Assembly on February 4, delegates engaged in worship, reflected on the mission of the church through a presentation by Dr. Art McPhee, met Eastern Mennonite University’s new president, heard reports from Virginia Mennonite Missions and other agencies of VMC, wrestled with ongoing issues of polity, were updated on the findings of and response to the D. Stafford & Associates report, and voted with regret to release a congregation from membership.

Held at Waynesboro Mennonite Church, Waynesboro, Va., , the delegate session commenced after a period of worship, when Dr. Art McPhee spoke on the “Mission of the Church.” His presentation reviewed the historical framework for the mission movements and the way in which historic experiences of the Early Church informed the way mission develop. Citing the work of Karl Barth, Leslie Newbigin, and N.T. Wright, he highlighted how the participation of the church in the mission of God is the most important framework for the twenty-first century believers. 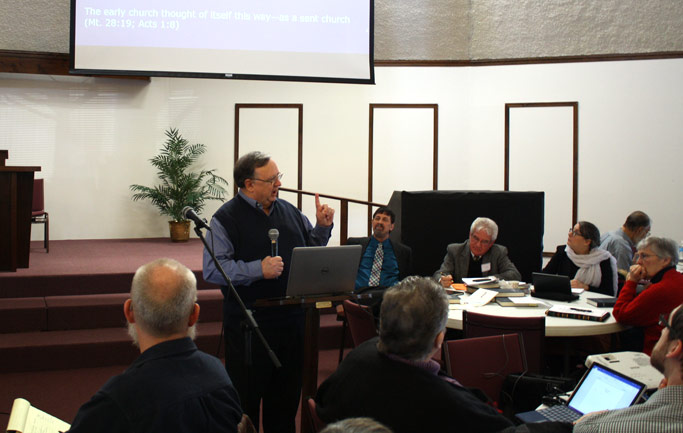 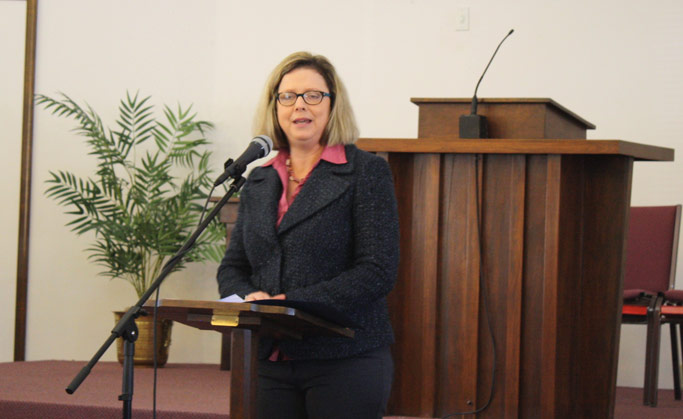 Dr. Susan Shultz Huxman, the ninth President of Eastern Mennonite University, shared her vision for an Anabaptist-Christian university. While highlighting its numerous achievements that demonstrate EMU as “a Christian university like no other,” she also acknowledged the challenges that higher education in a Mennonite context is experiencing. As EMU celebrates its one hundredth anniversary this year, she looks forward to the preparing youth and young adults to lead and serve in a global context. 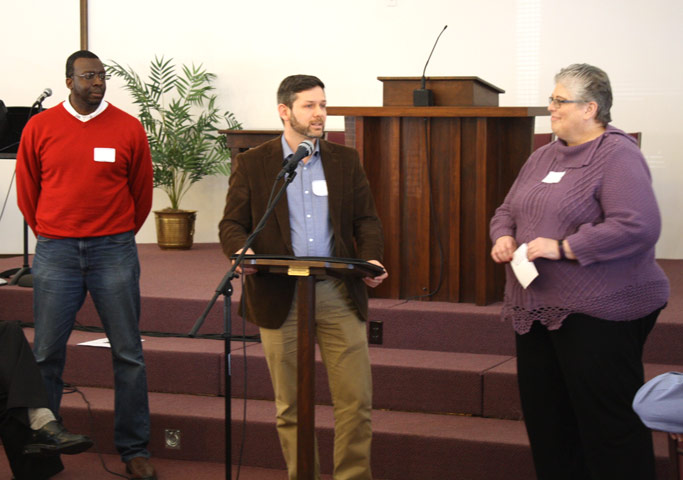 Aaron Kauffman, President of Virginia Mennonite Missions, presented an overview of the challenges and opportunities that exist in leading a mission focused agency of the church. While there is a slight decline in congregational giving, there has been a significant increase in individual support that comes through direct donations to Virginia Mennonite Missions and the numerous support groups that sustain mission workers through prayer, fellowship, and financial support. There remains a strong commitment to planting churches in North America even as new mission endeavors are emerging in overseas locations. VMMissions staff continues to provide emotional and spiritual support to workers locally and globally as mission frontiers and endeavors continue to evolve.

Virginia Mennonite Conference continues to navigate the turbulence of social change. Executive Conference Minister, Clyde G. Kratz, introduced a Polity Task Force to delegates, which is chaired by Phil Kniss, pastor at Park View Mennonite Church, Harrisonburg, Va. This six-member group will review the authority structure of the Conference, and will make recommendations that seek to provide clarity to how authority is exercised at the various levels of the Conference structure, including congregational decision-making. The task force will seek to complete their work in one year, then make key recommendations to Conference Council. The work will be coached by David Brubaker, a leadership consultation expert.

The decision was made to create the Polity Task Force at the Conference Council meeting on September 23, 2016. In his role as Executive Conference Minister, Kratz saw firsthand the challenges facing VMC specifically around individual and congregational responses to same-gender marriage issues. A number of congregations seek full inclusion of same-gender persons, with the whole range of pastoral services provided to them, and have begun to function (and desire to function) as autonomous congregations on matters of faith and practice. A number of congregations have expectations that Conference leaders, district ministers and the Faith and Life Commission will exercise more authority on pastors and congregations that move beyond common understandings, such as the Confession of Faith in Mennonite Perspective and other VMC documents.

Two resolutions passed at the 2015 Mennonite Church USA Delegate Assembly in Kansas City have not, as Kratz noted, assisted VMC in solving the tensions in a diverse conference. One called for upholding membership protocols through the Membership Guidelines Resolution and the other called for tolerance through a Forbearance Resolution. In denominational polity, regional conferences have the ability to apply national resolutions in their context as deemed appropriate for their circumstances. Virginia Mennonite Conference has done so by providing leadership direction through a Way Forward document, presented to the Winter Delegate Assembly in 2016.

Leadership decisions by the Faith and Life Commission restricting pastors from performing same-gender marriages, the limited application of the Forbearance Resolution in Virginia Mennonite Conference leadership practices, and continued unsettledness concerning the question of where authority lies on these matters gave rise to the necessity of a Polity Task Force to clarify our mutual understandings and how decisions are made.

The purpose of the Polity Task Force is to discern the future authority and structure of Virginia Mennonite Conference — including the role of Delegate Assembly, Conference Council, and the Faith & Life Commission — both regarding the relationship of these bodies with each other and the relationship between member congregations and the conference. The Polity Task Force intends to submit a report and recommendations to Conference Council by December 2017, and the recommendations will be intended to shape the authority and structural relationships of VMC for the next three to five years (2018 – 2022).
Members of Polity Task Force: Phil Kniss, chair, Craig Maven, Nancy Heisey, Alicia Horst, Ryan Ahlgrim, Wendy Malvaez; David Brubaker is coaching consultant. 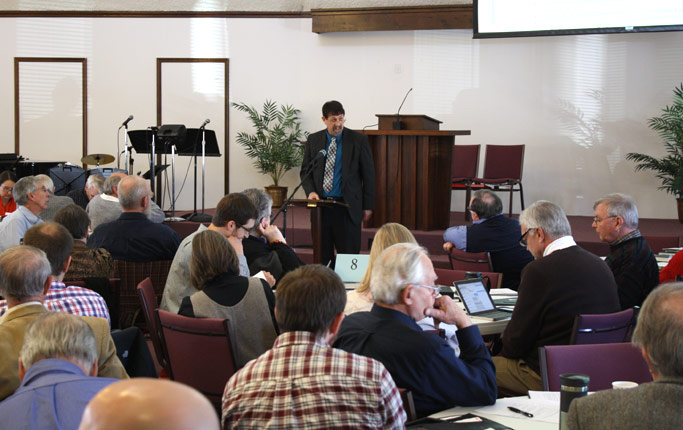 From this investigation, three key themes emerged concerning VMC and Lindale: To what extent, if at all, was the staff or board of VMC or Lindale Mennonite responsible for malfeasance in the way they handled the allegations that were made against Luke Hartman? How, if at all, might these two entities improve the way they handle allegations of sexual abuse in the future? And what best practices would DSA recommend for managing allegations of inappropriate sexual behavior, or misconduct of a sexual nature, that could also be a criminal offense, particularly when the conduct involves high profile individuals who do not carry ministerial responsibility?

Kratz noted that when DSA’s Confidential Report was released on November 25, 2016, there were some factual errors and legal questions surrounding the report which prevented its release. A final public report was released on January 13. There was a closure conversation that occurred with DSA investigators and representatives from MC USA, VMC, and Lindale on January 25, 2017. VMC provided a public news release of information on January 19 to Gordon Houser, Editor of The Mennonite. All of these key documents are on the Conference’s website, including that news release.

There are several mandates that Mennonite Church USA has identified for VMC to carry out. VMC will walk alongside and provide support for the Lindale congregation and its leaders as they process the findings, supporting documentation, determinations and recommendations of the MC USA Executive Board representatives. This work will primarily be carried out by Aldine Musser, District Minister associated with Lindale Mennonite Church.

VMC will consult with FaithTrust Institute to immediately begin a review process to determine if boundaries were violated according to A Shared Understanding of Ministerial Leadership: A Working Document by ministerial staff at Lindale. If so, VMC will follow protocol for a review of credentials.

As the Executive Conference Minister, Kratz is committed to conducting a ministerial credential review for Duane Yoder under the rubric of ‘abuse of power.’ The DSA report provides sufficient data to warrant this type of review. VMC has not rendered a judgment against Yoder, nor acted to suspend his ministerial credentials in order to allow for a due process to emerge that is consistent with VMC polity for a ministerial credential review. Yoder is on administrative leave from Lindale Mennonite Church, and has reported to the congregation that he will be retiring and will not return to the congregation as pastor.

Functionally, the process to file a formal complaint may take some time in order to gather supporting evidence from other persons that may have been impacted by Yoder’s leadership, counseling, or relationship dynamics. This time period will be a form of listening to complainants before an official complaint is filed.

Kratz is committed to abide by the MC USA directive to utilize FaithTrust in both the formation and implementation of a Ministerial Credential Review process which will take some time.

Several other mandates will occur in conversation with FaithTrust Institute as soon as possible.

One initiative that is under way is to have Lonnie & Teresa Yoder trained by FaithTrust to equip all credentialed leaders on boundary formation and its impact on ministerial roles and responsibilities. Lonnie and Teresa will travel to Kansas City for the training on May 10-11, and most likely be available for training events in each district in the Fall of this year. 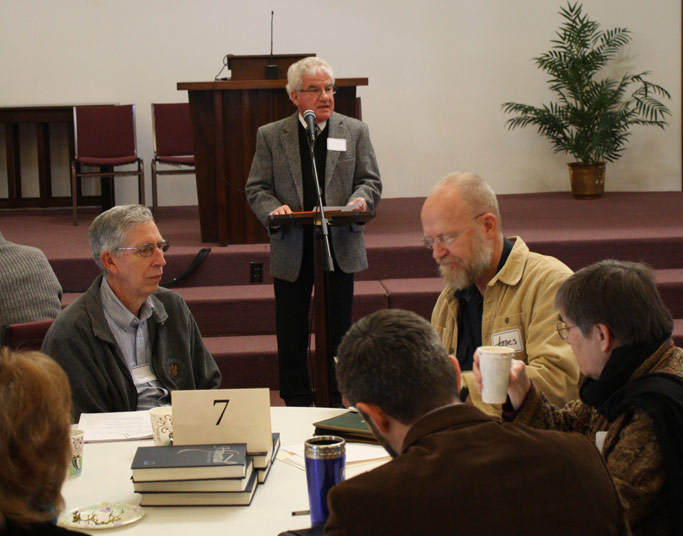 Moderator Elroy Miller reported to the Delegate Assembly that he had received two resolutions and two correspondences. The two resolutions were from the necessary number of delegates in keeping with the by-laws of Virginia Mennonite Conference for resolutions. The first resolution called for an honoring of a more tolerant approach to applying the Forbearance Resolution to a pastor that performs a same gender marriage. The second resolution called for the Conference to honor the discernments of the MC USA and VMC concerning membership expectations that are identified in the Membership Guideline Resolution and the Confession of faith in a Mennonite Perspective. A third correspondence was a petition by a group of members of Virginia Mennonite Conference to restore ministerial credentials to a pastor that is currently under suspension for performing a same gender marriage. A final correspondence was received from a prominent leader of the Virginia Mennonite Conference calling for upholding the membership guidelines and not to be persuaded by a group of persons that are willing to ignore the processes of the Church on matters of faith and practice. The leader also called for the Conference to revisit its primary commitments as a matter of discernment. Miller indicated that the Conference Council will review these statements and resolutions at the Conference Council meeting in March 2017.

The Delegates voted to release from membership Mountain View Mennonite Church, Lyndhurst, Virginia. The leadership of the congregation secured an almost unanimous decision to withdraw from Virginia Mennonite Conference. Earl Monroe, pastor of the congregation, worked with District Minister Beryl Jantzi over the last number of years as he expressed concerns about the direction of Mennonite Church USA and subsequently, Virginia Mennonite Conference. Key issues in this withdrawal include a congregational desire to uphold their interpretations of biblical authority, a perspective of Scripture as “inerrant and infallible,” and a desire for leadership that exercises authority when individuals and/or congregations move beyond the agreed upon beliefs and practices of the faith community. Also noted was a dissatisfaction with what they view as the direction of MC USA leadership and its constituency increasingly embracing same-gender relationships as normative in the life of the church. The delegates approved a motion that indicated a release from the Conference with regret.

All photos by Jon Trotter