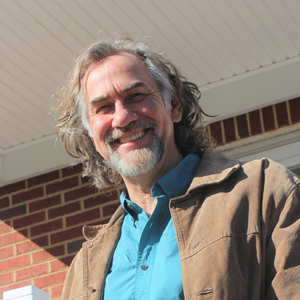 March 15, 2021
by Jim Bishop
Freelance writer based in Harrisonburg, Va. 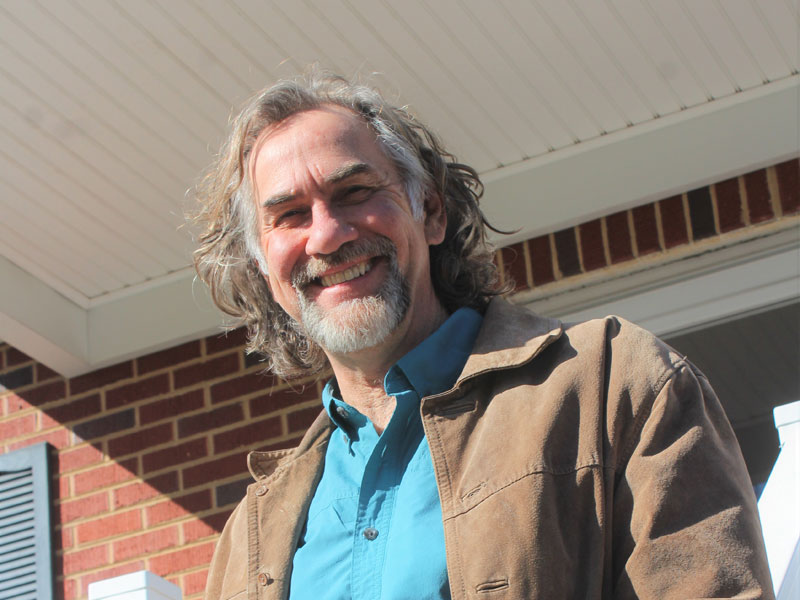 No one likes to be upstaged, no matter how well-meaning and worthwhile the activity that is being outdone.

This feeling especially rings true for veteran actor and playwright Ted K. Swartz of Harrisonburg, who has dealt with frequent unexpected script changes in his 34-year career.

In 1987, Ted, then a student at Eastern Mennonite University, met Lee Eshleman, a graphic designer at EMU. They discovered a mutual interest in and flair for acting and soon combined their talents as Ted & Lee, creating and performing quirky comedy sketches that probed the incongruities of everyday life.

The duo was particularly adept at making biblical characters seem human, vulnerable and believable in productions like ‘Fish-Eyes,” “The Creation Chronicles,” “DoveTale” and “Live at Jacob’s Ladder.” Audiences howled with laughter one minute, were moved to sober reflection, even tears, the next and went away craving more.

“To say it was devastating is putting it mildly,” Ted recalls. “I lost my business associate, my long-time creative partner and my best friend – all at once.”

In 2012, Herald Press published “Laughter is Sacred Space,” a backstage tour-de-force that chronicles Ted’s not-so-typical journey of falling in love with acting and theater while on his way to a traditional pastorate. Ted would become a theologian of a different sort, discovering that at the intersection of humor and biblical story is where one often finds new or different understandings of scripture and the human condition.

Other major productions followed, including “I’d Like to Buy an Enemy,” “What’s So Funny About Money,” a “Jesus Stories” show and “Boots, Buckets and Barrows” fund-raising campaign for Mennonite Disaster Service; “What Would Lloyd Do?” “Listening for Grace” and ‘Laughter is Sacred Space,” based on Ted’s biographical book.

Then, about a year ago, the unthinkable struck again.

Ted’s creative spark was dampened by the wet costume cast over his physical and mental being by the bad actor known as COVID-19. Touring schedules were put on hold, as scheduled performances one after the other were canceled.

“Simply being onstage became impossible, and that will continue to be the case for the foreseeable future,” Ted notes. “Shows have been 90-95 percent of income for the last two decades. Some of them may have to be retired.”

Ah, there’s the rub: The biggest obstacle for Ted has been “the difficulty of the maybe” – “Maybe we will have audiences . . . maybe enough people will receive the vaccine . . . maybe churches, colleges and institutions will have the budget to hire us . . . maybe . . .”

Another conundrum: How much can be done, “When I’m 64,” Ted asks. “Is the model of a market-driven company possible anymore?”

Ted is feeling the pull to move into a mentoring role, encouraging and enabling other artists, especially those from a more diverse background.

“There’s lots of good opportunities and ideas being generated along this line,” he states. “Maybe the pandemic has sped the process along toward a model of less touring and more enabling.

“I still love writing and performing, but I need it less to bolster my identity – and ego,” Ted adds.

In 2019, Ted and several fellow artist-colleagues established The Center for Art, Humor and Soul (arthumorsoul.com). The non-profit program has, as Ted describes it, “a dual purpose in advancing the arts and spirituality in a culture that desperately needs new stories to shape a just and grace-filled society.” In his role as executive director, he lets people know about the Center, does networking with other artists and fundraising.

He and his acting colleagues are using a different medium – video and online presentations – with some success, but the one thing that can’t be replicated and remains the ‘intrinsic value’ is the live onstage experience where the possibility of improvisation and disaster within a written script help an audience stay engaged.

Ted and artist-collaborator Michelle Milne of Goshen, Ind., are creating a live show and a series of videos based on the Enneagram, a popular personality typing tool. The as yet untitled show will seek to help persons understand how different personality types work in human relationships and can provide insights into unlocking sometimes mystifying behavior in ourselves and in others.

Another project of the Center for Art, Humor and Soul is “Portraits of Human Faces,” a book co-created with Valerie Serrels with photography by Steven Stauffer, that brings to light a topic often kept in the shadows – mental illness and suicide. A feature-length film based on the book will be released this spring.

So how does one go about finding humor in these difficult times? What is funny and why? Ted is scheduled to weave monologue and story in providing some answers with his one-man performance, “Life is a Comedy,”” on Aug. 27 at the Sipe Center in Bridgewater.

Ted & Company TheaterWorks can be reached at 540-560-3973 or office@tedandcompany.com for performances being offered and available dates. Details on shows, scripts and downloadable videos are also available at tedandcompany.com.

Despite too-frequent duels with the box office, Ted is facing the future with a fresh resolve that the curtain will open, the spotlights come up and the interaction between actor and audience will continue.

“I’m addicted to goose bumps and laughter,” he smiles, “and I feel a spiritual calling to continue sharing these gifts with others.”

The article appeared as the Bishop’s Mantle column in the March 13, 2021 issue of the Daily News-Record, Harrisonburg, Va.