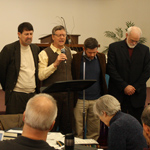 Congregational delegates of Virginia Mennonite Conference gathered for Winter Delegate Session at Waynesboro Mennonite Church, where they heard from the chair of the Polity Task Force, provided feedback in table groups and open microphone, and were introduced to the Restructure for Mission Committee, the group that is working on implementing the Polity Task Force’s recommendations.

Ervin Stutzman, the retiring Executive Director of Mennonite Church USA, stated that the nature of what God wants us to do is create shalom.

“What does the gospel look like when it is genuine good news?” he asked. He shared how the spiritual streams evident in MC USA have shifted over the years, leaving some now feeling alienated while others feel more empowered.

Through the “Journey Forward” process, which arose out of the Future Church Summit held last summer at Mennonite Church USA Convention in Orlando, congregations are asked to look at what God is calling their congregation to do next—what God’s mission is for them—and provide feedback. Referencing Colossians 1:19-20, Ervin cautioned against making God’s redemption too small. It includes all of creation. He encouraged delegates to “embrace the different spiritual streams because they all —together—allow us to see the fullness of God at work and the broadness of our collective mission.” 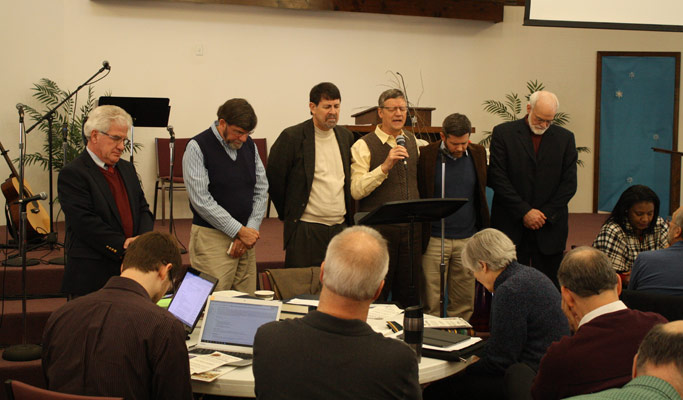 Conference Moderator Elroy Miller highlighted work that Conference Council has completed since the July 2017 Delegate Session. He noted the “spirited conversations” on Council related to the Polity Task Force report, which they approved. He strongly affirmed the work of Gordon Zook, who served as Interim Conference Minister from October 1, 2017 through January 2, 2018. The internship provided a sabbatical opportunity for Executive Conference Minister Clyde G. Kratz. Delegates provided loud applause in appreciation of Gordon’s work.

Conference Council counseled Kratz about which of his roles to emphasize or de-emphasize. Priority was given for engaging locations outside the Harrisonburg area, but with fewer direct visits to congregations than in recent years.

To provide more clarity about decision-making, Conference Council is communicating more about investigative processes (not details) regarding alleged ministerial misconduct in an effective but careful way that doesn’t damage a leader’s reputation during the investigation period, nor protect one side at the expense of the other. FaithTrust Institute, the consulting firm that worked with VMC through the Luke Hartman/Duane Yoder investigation, has notified VMC that its current misconduct policy is protective of alleged offenders, but less supportive of those who have been offended.

Council also noted that VMC needs greater transparency as leaders move from one district, or one conference, to another; that VMC needs to provide more clarity when conflicts of interest occur; and to pay more attention to ways others can speak into processes, such as through advocates who can provide a culture of care for congregations walking through a process.
Delegates approved Council’s recommended mission statement by a show of hands. The new statement is “Virginia Mennonite Conference equips pastors, lay leaders, and congregants for worship and service, and to bring the Good News of Jesus Christ to neighbors near and far.”

Eastern Carolina District (ECD) Minister Spencer Bradford reported that ECD supports Chapel Hill Mennonite Fellowship’s and Raleigh Mennonite Church’s request to transfer their membership to Central District Conference, which is more open to the congregations’ desire for greater inclusion of LGBTQ relationships. The request to transfer comes after a five-year discernment process; both congregations feel that VMC lacks support for their pastors and silences their congregations. The District remains in fellowship with Chapel Hill and Raleigh in spite of the disagreements within ECD on this issue. Delegates Aspen Yoder of Chapel Hill, and Rachel Taylor of Raleigh, provided their perceptions of the withdrawal process, and expressed pain, sorrow, and rejection from the Conference.

Upon the recommendation of Conference Council, the delegates of the 2018 Winter Delegate Session, with regret, released Chapel Hill and Raleigh from membership within VMC at the request of the congregations, and the subsequent action of Eastern Carolina District, the release pending and contingent upon their acceptance into the membership of Central District Conference.

Reports from ECM and Commissions

Executive Conference Minister Clyde G. Kratz gave highlights of his activities from his recent October to December 2017 sabbatical, and shared with delegates about his ongoing work. Kratz encouraged credentialed leaders to discuss concerns with their district ministers, who are members of the Faith & Life Commission. Kratz also reminded leaders that the districts are responsible for both resourcing leaders and providing congregational oversight, and not to prioritize one task over another.

Roy Hange, vice-chair of the Faith & Life Commission (FLC), reported on highlights of their work since last summer’s Conference Assembly. Members have participated in Healthy Boundaries:
Fundamentals, and Responding to Clergy Misconduct trainings, both provided by FaithTrust Institute. FLC recommends that all active credentialed leaders complete the Healthy Boundaries: Fundamentals training, which is being made available in districts throughout the Conference. He also reported that FLC is considering a recertification proposal for credentialed leaders. The Commission is working to fill vacancies in the role of chair, and oversight leaders for the three clusters: administrative/ leadership, chaplains, and teaching.

Congregational Life Commission (CLC) Chair James Musser informed delegates of two priorities his commission is currently engaged in: youth ministry, and men’s ministry. CLC hosted a coffee hour in January, where interested persons brainstormed ideas to revitalize youth ministry. They agreed on the formation of a youth council. CLC is considering revitalizing Mennonite Men, but is discerning whether people’s interest supports revitalizing it or working in a different direction.

VMMissions President Aaron Kauffman quoted Nehemiah 8:10, “The joy of the Lord is our strength.” He acknowledged plenty to lament about, but also much to be joyful about. He noted several board membership changes. Lavonne Lehman will serve as VMMissions Board Chair when Shawn Manning reaches the end of his maximum number of terms this fall. Terry Witmer has accepted the role of vice-chair. Financially, VMMissions ended the 2017 calendar year with a deficit, but by the end of January giving bounced back. VMMissions also received a large estate gift of $500,000.

Kauffman also noted a number of staff changes. Ken Horst is retiring after 31 years serving VMMissions (13 years in Italy, and 18 on staff at the Harrisonburg office); Steve Leaman will move from a part-time role to full-time starting in May; Mindy Schwartz is now serving as event coordinator and MST coach; and Martin Rhodes is serving as discipleship ministry coach.

VMMissions has approved a new mission statement: “VMMissions partners in equipping and sending workers from anywhere to everywhere.”

Phil Kniss, who served as chair of the Polity Task Force, provided a report to delegates and answered questions from delegates about the work and recommendation of the task force. Those recommendations were approved at the November 2017 Conference Council meeting, and have been forwarded to the newly-formed Restructure for Mission Committee for implementation. Table groups shared feedback to the delegate body, which VMC has compiled.

Kniss noted that the current Conference governance structure was adopted in March 1994, and served the Conference well, but the current generation’s leadership practices may require changes in order to function more effectively.

The Restructure for Mission Committee, a new group tasked with taking the Polity Task Force recommendations and delegate feedback, and implementing new structures to align VMC’s structure with its mission, was introduced to delegates. David Brubaker has agreed to serve as coach for the committee as they begin this process. Any questions about this process should be directed to the Restructure for Missions Committee through Elroy Miller, chair.