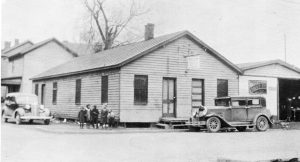 What’s under the surface in your neighborhood?

Gay Street Mission, the first Mennonite church in the city of Harrisonburg. Photo from VMC Archives.

Harrisonburg’s northeast neighborhood is the historic African American part of the city. Originally “Newtown,” this community was formed by formerly enslaved people after the Civil War. Folks built their own homes, purchased land for a cemetery, constructed churches, and started businesses. The community became part of the city of Harrisonburg in the 1880’s. In just over seven years of pastoring at Immanuel Mennonite Church, I have been blessed to hear and learn from so many stories from longtime congregants and neighborhood leaders. Stories of vibrant classroom and community learning at the Effinger Street School, stories of Lucy Simms and Roberta Webb (both long time teachers) and Richard “Earl” Johnson (an Olympic medalist in 1920 and 1924), and the challenge of confronting community fragmentation. From this deep well, I put together a walking tour of the neighborhood to help orient new members of Immanuel to the stories under the surface of the community. It was my great privilege to respond to an invitation from VMC’s Racial Justice Task Force and make this walk available to interested folks in the conference and community. In the past few months, more than fifty people have taken the walk through the neighborhood. The next few paragraphs provide a glimpse of one of the stops on the walking tour.

The second stop on the walk was the site of the Gay Street Mission, the first Mennonite church in the city of Harrisonburg. Standing on that spot, now part of a parking lot, we can look west to route 11 and into the past. Between 1800 and 1850, hundreds of thousands of enslaved African Americans were marched south on that road.

From that same spot, we look east and see a huge parking lot and units of Section 8 public housing. Just 65 years ago, we would have seen the heart of Harrisonburg’s African American community: homes with verandas, a community center which contained restaurants and a dance hall, and a number of businesses. But, between 1959 and 1965, these homes and businesses were seized by eminent domain, burned or bulldozed to the ground, and this community was replaced with a shopping mall and its parking lot. Neither the story of forced migration nor the destruction caused by urban renewal is memorialized with a public monument.

Dr. Elise Boulding, a 20th Century peace scholar, noted “the 200-year present.” The 200-year present began 100 years ago with the year of birth of the people who have reached their hundredth birthday today. The other boundary of the 200-year present, 100 years from now, is the hundredth birthday of the babies born today. Dr. Boulding’s framework gives us a lens through which to listen to the stories under the surface in order to clearly name and lament the brokenness, celebrate that which is good and resilient, and to humbly seek transformation that may take more than 100 years. In that hope, I offer the following:

How might you listen to the stories with a partner or group, particularly around race and the church, in your neighborhood?
How might learning these stories impact how you and your congregation follow Jesus?
In sending, please take a walk in your neighborhood (with at least one other person). Go slowly. Listen deeply. Imagine the healing, repairing, and justice the Lord might call us to today…and through the next 100 years.