The three homes collectively known as Woodland Park on the campus of VMRC were dedicated and named in May. VMRC opened Woodland Park in January to offer complete living care in a home environment.

Showalter House is named in honor of the HDH and MC Showalter families. “These two families have contributed innumerable hours of time and financial resources over the years to make VMRC a leader in aging services,” said Les Helmuth, executive director of the VMRC Foundation.

Yoder House is named in honor of Ronald E. and Shirley B. Yoder for their commitment to build homes which provide privacy, offer dignity and restore hope. Ron’s leadership and vision as VMRC President and CEO made the first phase of Woodland Park possible.

Warsack House is named in honor of Elsie Warsack for her generous estate donation to VMRC.

The names of the homes were announced at three separate dedications held in the respective homes. Memory albums containing photos and short biographies of residents, shahbazim and major donors were unveiled and given to major donors along with albums to be in each house.

“These homes could not have been built had it not been for the vision, leadership and financial commitments of the persons for whom they are named and the donors who shared so generously,” said Les Helmuth. “The legacies of these honorees will be compassionate, loving care in a home environment to persons who never thought they could return home.”

Each house is approximately 6,500 square feet in size. The homes are fully licensed as nursing homes and are staffed by certified nursing assistants who have additional training in CPR, first aid, house operations, culinary skills and safe food handling. People living in Woodland Park will receive support from a clinical support team made up of nurses, social workers, activities coordinators, therapists, nutritionists and a physician. 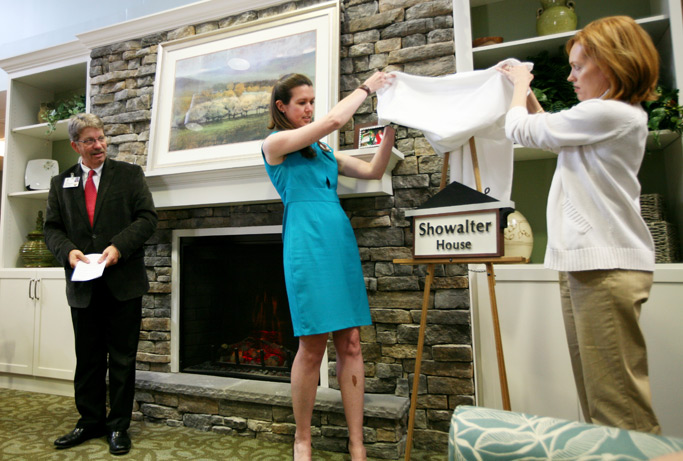