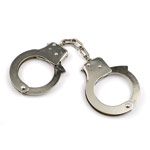 On a Saturday in June this year, members of Durham (N.C.) Mennonite Church were working together to paint, clean, and mow around the church property, when several police cruisers parked around the intersection in front of the church. Focused on our work at hand, we paid little attention to them until an SUV turned aside into the church driveway. A Hispanic family with two small children and an infant climbed out and approached us. None of them spoke English, and none among us spoke Spanish, but the urgency in their voices led us to pull out cell phones to reach someone who could interpret for us.

As we dialed and awkwardly tried to understand each other, my eyes drifted over to the police in the road and then it clicked: what we were seeing was a roadblock, and this family needed to avoid it or face possible arrest and deportation. As a signatory of the federal 287(g) program, the Durham Police Department is able to arrest and detain people on immigration violations, making thousands of Durham residents vulnerable to arrest and deportation at any time.

Our congregation was already aware of the precarious situation faced by many of our immigrant neighbors, since in 2008, the pastor of the Guatemalan congregation that shares our building was arrested and deported while driving in another county. We see roadblocks near Hispanic neighborhoods or on major thoroughfares with the stated purpose of screening for unregistered vehicles and unlicensed drivers, but implicitly targeting undocumented immigrants, who by law cannot acquire drivers’ licenses.

Once the situation of this family became clear to us, we simply did what was necessary—we invited them to wait inside the building until the police were gone. Had we turned them away, they might have been pursued and arrested for fleeing a roadblock, an event that could have split up the family and left the children without parents. By inviting them into our sanctuary, our statement to any police officers was clear: this family belongs here, among us, and we belong to them.

The words of Deuteronomy 10:14-19 spoke very loudly in worship the following morning, ending with the words: “the Lord…loves the strangers, providing them food and clothing. You shall also love the stranger, for you were strangers in the land of Egypt.”

The passage reminds us that even God’s people cannot claim to own the place where we dwell and thereby cast out or exclude those who do not “belong.” It ends with a reminder that, as God’s people, we are all aliens and sojourners in the places we inhabit. As Gentile Christians, we remember that we are the foreigners grafted into the household of Israel, and so our welcome of the stranger is simply the outworking of God’s welcome to us.