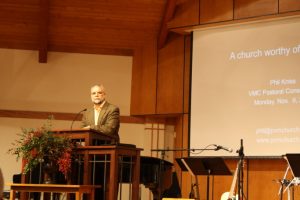 This was the fifth in a series of five Virginia Mennonite Conference consultations that offered a space for input and conversations on issues in the church. The format included plenary sessions, table discussions, listening and responses as leaders sought to come to a greater awareness and understanding of each other and the mission of the church despite a variety of viewpoints. In two evening services, the public was invited to join a time of worship and input relating to the themes of the consultation. Several persons shared devotionals before the morning input sessions began.

The Pastoral Consultation was designed to equip pastoral leaders to learn together how to talk about difficult issues, not as a legislative process that would involve voting on resolutions.

“This is about learning about each others’ strengths and challenges as we get to know each other better. This is a chance to discuss and navigate as best we can for the time we are in. We beckon the Spirit’s presence. We need God’s Spirit among us,” said Clyde G. Kratz, Executive Conference Minister of Virginia Mennonite Conference.

Despite many emotions evident, including pain, fatigue, restlessness, ambiguity, and tension, there were also moments of joy, understanding, humor, grace, deep emotional connection, and appreciation for a time together to be vulnerable and build trusting relationships. Participants shared meals, shared their reflections around tables, and table groups shared their reflections with the larger group. An important part of the time together was worship, led throughout the morning and evening by members of the Lindale Mennonite Church worship team.

The input shared throughout the consultation was commended for its valuable contribution to the conversations. 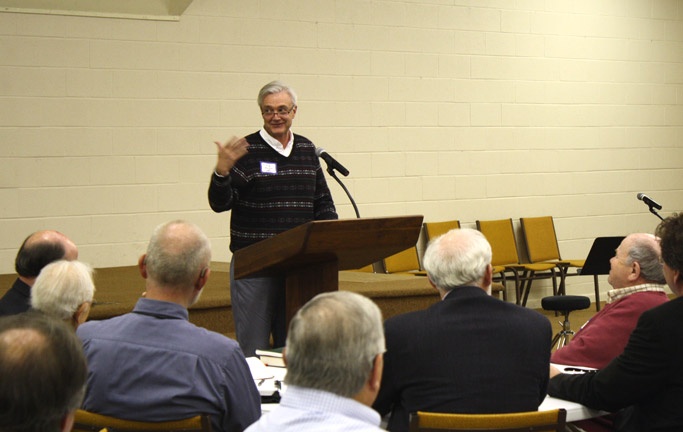 Craig Maven, lead pastor at Harrisonburg Mennonite Church, gives a presentation on the intersection of the church and culture, and how it has changed over time. (Photo by Jon Trotter)

The church and culture

Craig Maven, lead pastor at Harrisonburg Mennonite Church, provided an overview of ways in which the Mennonite church has interacted with culture over time, and various ways we can view Christ as against culture, over culture, or a transforming agent of culture. “Which culture?” he asked. There are many different cultures in the pluralistic environment we live in, including in the church.

He traced the immigration of Mennonites to North America as an agent of change in the way they viewed their role in culture, from a quietist and non-participatory people of non-resistance, through a long process of change to a people of non-violence and activism.

“We cannot exist as a church without an element of culture to contrast against. But which culture are we contrasting against? The shift is still ongoing,” Maven said.

Phil Kniss, lead pastor of Park View Mennonite Church, brought the Monday evening message on the different kinds of unity in the church.

The unity of God’s kingdom

Phil Kniss, lead pastor of Park View Mennonite Church, Harrisonburg, Va., brought the Monday evening message on “The Unity of God’s Kingdom,” identifying, as he sees it, four distinct kinds of unity. “I think it would serve us well to be more clear and more specific, when we use the word unity in church conversation,” he said.

He identified kingdom (or spiritual) unity as “the unity he have when we together confess the rule of Christ in the world.” This unites persons of faith across the globe as brothers and sisters in Christ despite many different theologies and practices. It is what brought the global Mennonite church together at Mennonite World Conference this past summer.

The second he calls missional unity. “We are able to join hands (that is, be in unity) around a common cause for the common good, even if our motivations differ, [and] even if our theological affirmations differ.”

The third is what he terms functional unity. “It’s agreeing how we will function together as a social body, how we understand our rights and responsibilities, our authority, [and] our participation in decision-making,” he stated. “We have to…come to a shared understanding of how to function in a new environment. How much disunity in other areas can we absorb, and still maintain a healthy, functional system?”

Finally there is covenantal unity, “a more intentional and explicit and far more challenging kind of unity to work at. It’s when we are united because we have articulated a particular covenant, we have made explicit promises, before God, to each other,” as well as articulated how we will support and give account to each other for those promises.

Nancy Heisey presents six Christian views of homosexuality across a spectrum, using the Scripture bases usually used for each position and the questions or implications each raises. (Photo by Jon Trotter)

Nancy Heisey, a New Testament scholar and professor at Eastern Mennonite University, presented a spectrum approach with scriptural bases for each of six Christian views on homosexuality, as well as ethical implications for each one. She first addressed a few terminological issues to define homosexuality more accurately and cited five different approaches to how Scripture has been, and is, viewed and read— both in the historical faith community and in the contemporary world.

The six views are:

Each of these views contained Scriptures commonly used as bases for the position and Heisey noted some questions or dilemmas that each view raises. 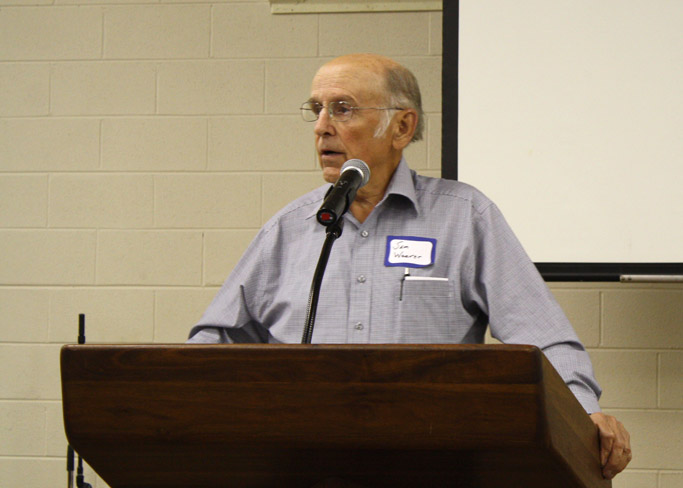 Sam Weaver shares about VMC’s history of navigation through some of the difficult issues during his tenure in the 1980s. (Photo by Jon Trotter)

Sam Weaver, a former Virginia Mennonite Conference administrator, addressed several of the main issues and challenges during his tenure in Conference leadership. He cited a well-known story from Reader’s Digest to illustrate how people can be prone to divide over very minor differences and asked, “Who are we pushing off the bridge?” He emphasized the need for evangelism.

“Evangelism is a good word,” he said. He examined four periods of VMC history. In the early days (1951-65), there was a lot of street evangelism and an emphasis on growing and planting churches. Later, from 1966-1980, VMC was plagued by a lack of church planting and arguments over nonconformity. During that time, Southeastern Conference left VMC. Then there was a renewed emphasis on church planting from 1981-1995, part of “Vision 95” by the Mennonite Church, when 31 churches were planted. There were endowments to fund church leadership training. Half of the mission board budget was designated for local church planting. There was excitement about this shared mission, and large numbers of people participated in events like Virginia Mennonite Conference Assembly.

But there were a number of significant issues. Some churches that now comprise Eastern District were located in communities with a large military presence and they grappled with the issue of members of the military desiring church membership. The district drafted a statement about this issue to the larger church, but because this was seen as a dogmatic compromise by some leaders from the Shenandoah Valley, this statement was viewed as “heresy,” according to Weaver. Pastors were simply unwilling to reject or prohibit up to a third of their congregation from membership.

Weaver shared his pain at not being able to ordain women during some of his time in leadership. He gave an example of a woman appointed as a mentor to a male pastor, but as a woman, she couldn’t be ordained at the time due to church polity. (She was ordained later.) Weaver sought counsel with several leaders including George Brunk II and Linden Wenger. Their counsel led him to value erring on the side of grace and being okay with some ambiguity on the issues.

He reflected on a narrative about the many challenges in his time of leadership and the ways his mentors and colleagues dealt with these. He challenged participants to embrace evangelism and not get wholly consumed by the issues. “What will people in 2030 be writing about us?” he asked. He stated that issue obsession can lead to a dead church and division, leading to oblivion. “Evangelism needs to be our primary goal and purpose, not agreement on every issue,” he said.

Members of a panel frame a discussion on the two resolutions passed by delegates at Mennonite Convention this summer from their perspectives. (Photo by Jon Trotter)

Framing the issue of ‘Forbearance’ and ‘Membership Guidelines’

During an evening session open to the public, a panel of five pastors shared their hopes, dreams and laments about two resolutions passed by the Mennonite Church USA delegate body this summer at Convention in Kansas City, Mo.

Pastors engage in response conversations at their tables. There were times for conversation after every input session. (Photo by Jon Trotter)

David Brubaker, a conflict mediation specialist who has worked with mostly faith-based groups over the past 30 years, led a series of circle processes, first around participants’ tables and then in a Samoan circle filling the room. This structured time of listening and speaking addressed hopes, challenges and next steps for Virginia Mennonite Conference. Pastors and credentialed leaders had the opportunity to sit in the inner circle and shared with the group if they felt led to. A time of vulnerability and deep emotions, some held back tears as they spoke. Many shared suggestions for future conversations.

From his many years of conflict mediation, Brubaker identified five points of process structure and relational structure:

Three persons shared devotionals for the Consultation participants across the three days. Dawn Monger, a pastor at Lindale Mennonite Church, led a devotional based on her reflections on a trip to Israel/Palestine that made her realize the importance of listening and looking someone in the eyes, even when it was extremely painful and there was very little commonality. She reflected that every person is still a person made in the image of God and loved by God.

David Mishler, pastor of Huntington Mennonite Church, Newport News, Va., shared a devotional of his experience of seeing seeds of hope on the horizon. He shared that the two resolutions passed at Mennonite Convention in Kansas City may lead us to a path, a higher plane than division. “The church must hold various world views together. Much of church activity has been focused inward instead to those outside our walls.” As churches come to decisions whether to stay in Mennonite Church USA or go, Mishler suggested that the conversations about same-gender issues are not an impediment to evangelism, but will inform the kind of evangelism we do.

Clyde G. Kratz, VMC Executive Conference Minister, shared a devotional before the last sessions with David Brubaker. “We can be scared to make decisions,” he acknowledged. “We often avoid conflict, and set up structures or processes that will avoid it.” He asked the questions: Where does incremental change lead us over time? How does it help us become more like the kingdom of God than we currently are? He reflected on the quote, “There is no power greater than a community discovering what it cares about.”

“We are not in this alone,” Kratz shared, “We all have hopes, dreams, fears and dilemmas. If we don’t plant anything, and try to hold on to what we have, it will get away. God calls us for such a time as this, to lead.”

Executive Conference Minister Clyde G. Kratz makes some final comments at the conclusion of the Consultation. (Photo by Jon Trotter)