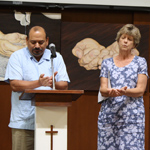 Across boundaries and divisions, being “Neighbors: Strangers No More”

I bind my soul this day to the neighbor far away, to the stranger near at hand in this town and in this land. (Verse 2 of I Bind My Heart This Tide)

In a landscape of walls and fences, of separation and alienation because others may look, sound, and act different from us, delegates and those who attended the evening worship sessions at Virginia Mennonite Conference Assembly were challenged to become intentionally vulnerable, and to embrace the stranger and foreigner as our neighbor across lines of difference.

In the diverse city of Harrisonburg, Va., where Assembly was held at Park View Mennonite Church, people from all over the world are our neighbors. In a polarized political climate of increased deportation efforts, it was here, in this community, that Immanuel Mennonite Church and Pastor Matthew Bucher first erected a sign in English, Spanish, and Arabic, the three predominate languages of the church’s neighborhood, in front of the church: No matter where you are from, we’re glad you’re our neighbor. The message was redesigned for yard signs and released to whomever wanted to print them. The result has been a widespread phenomenon that has gained national attention. 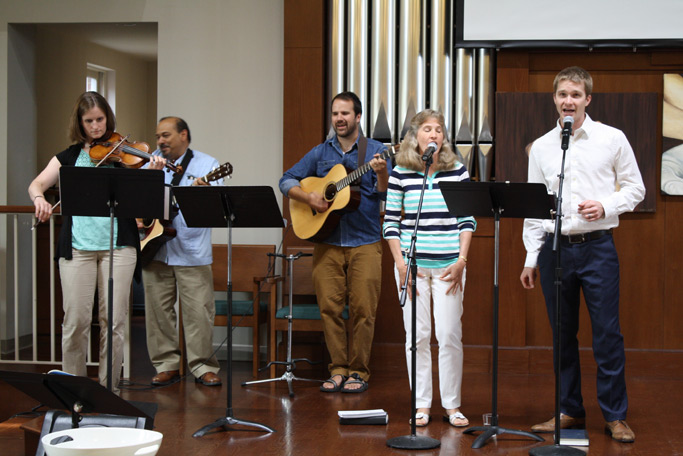 The worship team leads the evening service in song. All photos by Jon Trotter

Welcoming the stranger as our neighbor is a concept that permeates the entire biblical story. It may also be one of the hardest to practice, because it requires changed lenses of understanding. How do we see God in everyone we meet? Where do we find the love of God for all people when we can’t understand someone, distrust them, or fear their motives? It takes vulnerability. It takes a compassionate heart and a sacrificial willingness to bear one another’s burdens. Real relationship comes when we reach across the barrier, when we are open to learning from another and trusting that God loves them equally. 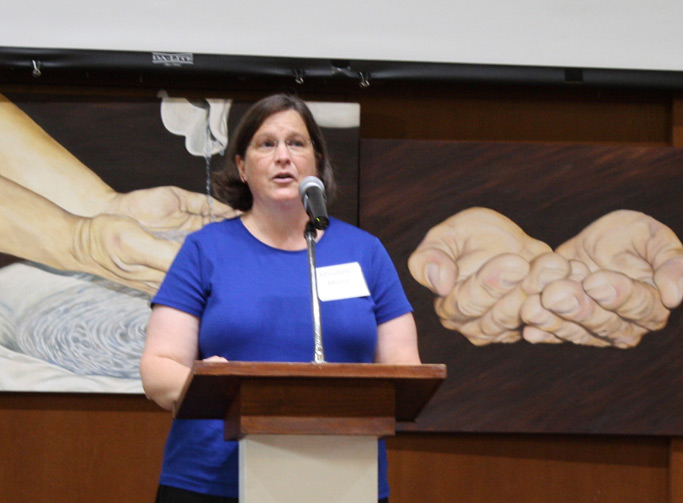 MaryBeth Heatwole Moore shared about Signs of Life and the church’s ministry to the deaf community.

At the Thursday evening worship service, MaryBeth Heatwole Moore shared a missional story. She pastors a new deaf church in Staunton, Va., called Signs of Life. Deaf people, she said, are among the most unreached people group for the gospel in the world. They often endure a deep pain of separation from the hearing world, because many people make no effort to communicate. They face low expectations, as they are often thought to be unintelligent or incapable of learning. They feel forgotten by society and by God. Moore said that members of Signs of Life shared that they had never known that God loved them and valued them, because they were treated as a mistake. By delegate vote, followed by loud applause, this small congregation—which has been used by God to heal wounds caused by separation—was promoted to full congregational status and accepted into membership the following day. 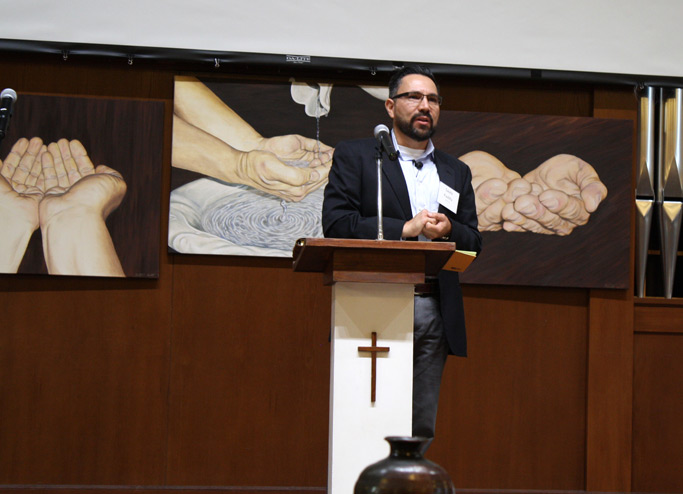 Using the John 4-1-42 text, the story of the Samaritan woman at the well with Jesus, speaker Saulo Padilla, Mennonite Central Committee’s US Immigration Coordinator, noted the woman’s question to Jesus: “Aren’t you a Jew? Don’t you know I am a Samaritan?” While the woman turned the well into a wall of separation, Jesus turned it into a bridge, an invitation. “Won’t you give me a drink?” He had a human need for a drink, but he also had something to offer: living water and redemption for her dignity. Padilla noted that maybe we see immigrants or foreigners as only in need, but they also have much to offer. We often go to the law, he said, on the issue of immigration, but why not the scriptures? Abraham was a stranger who had to hide the identity of himself and his wife. Joseph was sold as a slave by his brothers, a victim of human trafficking. Jesus was an immigrant from heaven, and also experienced a refugee’s flight to Egypt with his family. How can the many stories of God’s concern for the stranger among us be our starting point in the present debates? 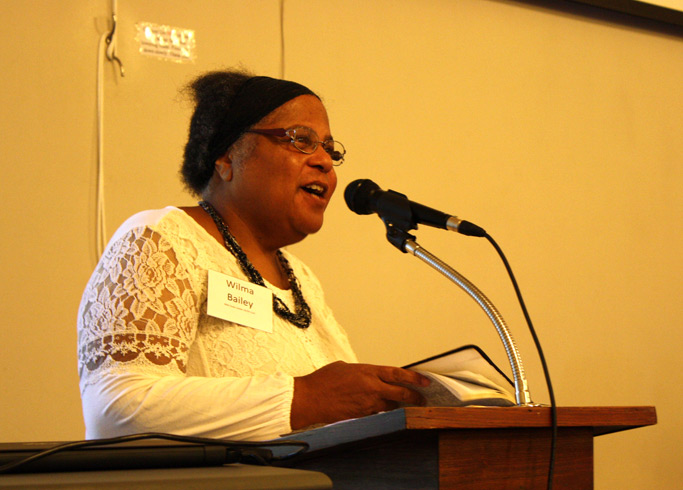 Wilma Bailey, an Old Testament scholar, led Bible studies on Friday and Saturday from the books of Ruth and 2 Kings. These Old Testament examples are replete with stories of Israel and strangers or foreigners, and God’s command to love those in their midst as neighbors. 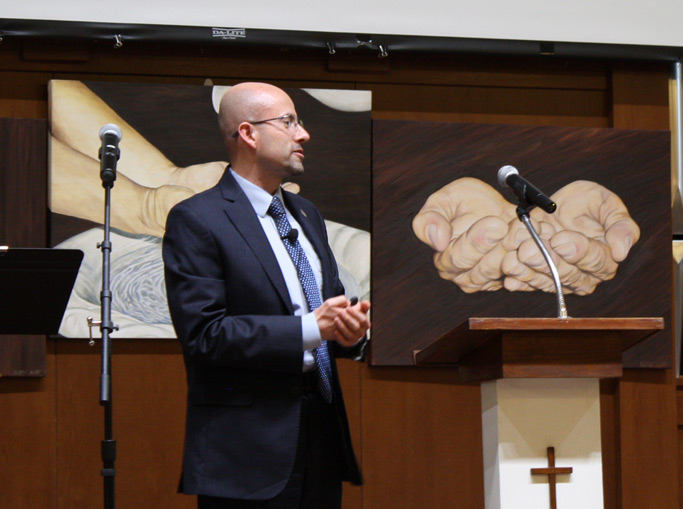 “The mission of God is about vulnerability,” said César García, General Secretary of Mennonite World Conference and the Friday evening worship speaker. Based on the Acts 10 account of Cornelius the centurion and Peter, García used the term anomalies to describe strange or different aspects of the story from the old understandings. Peter was a minority within a minority, a Jew who followed Jesus, who is sent for by a representative of an occupying foreign power – a God-fearing Gentile Roman soldier and a minority among his people – with a heart of trust and a desire to know more about God. Peter needed to be vulnerable to God’s new command to “Kill and eat!” all that had been deemed unclean. He rejected this command three times, but eventually came to understand that God is in the business of breaking down walls of separation and is pouring out his Spirit on Gentiles. 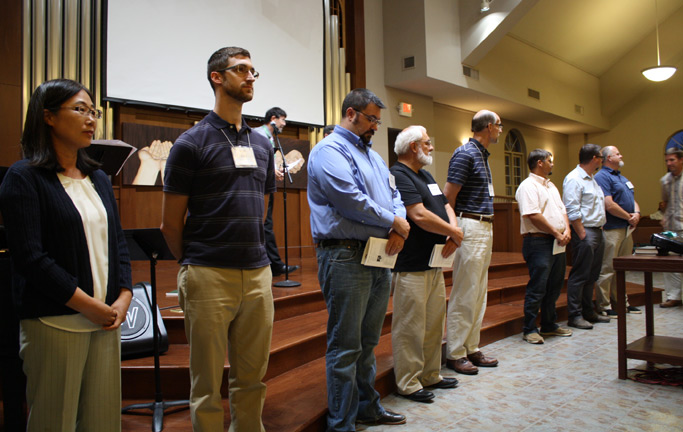 Some of the pastors and credentialed leaders commissioned on Friday along with VMMissions workers. 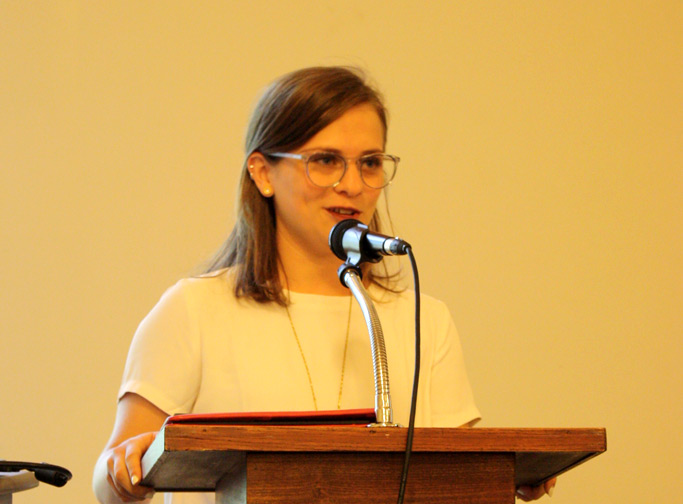 Taryn Zander, a VMMissions worker, shared about her work and vision with short-term teams and refugee ministries at the Friday morning delegate session. 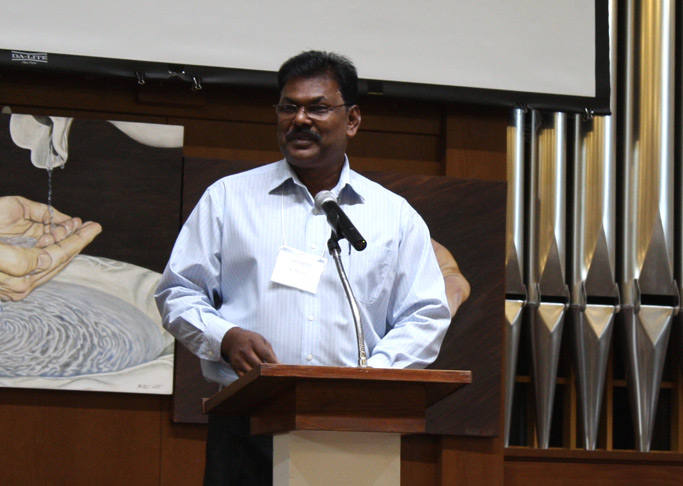 During the delegate sessions, delegates received reports and updates from Clyde G. Kratz, Executive Conference Minister, Moderator Elroy Miller, Virginia Mennonite Missions, and many other VMC-related agencies. Virginia Conference is working with FaithTrust Institute’s Healthy Boundaries trainings and local trainers Lonnie and Teresa Yoder to train credentialed and lay leaders in all districts in the coming year. Due to the urgency of the boundary training and a desire to act quickly, schedules are filling up. Pastors are encouraged to bring congregational leaders along for the trainings so the congregation is more invested.

Conference Council is also engaged in a review of polity through a Polity Task Force, which over the next year will examine the power structures and ways that congregations relate to the Conference. They will then bring recommendations to Conference Council.

As in the theme, the business of the church required a willingness for delegates to be vulnerable as they worked from different positions but approached each other in love and with mutual respect. Honest questions and thoughts were a part of open microphone times, which delegates appreciated. Many noted how the theme and content of Assembly was timely and relevant. 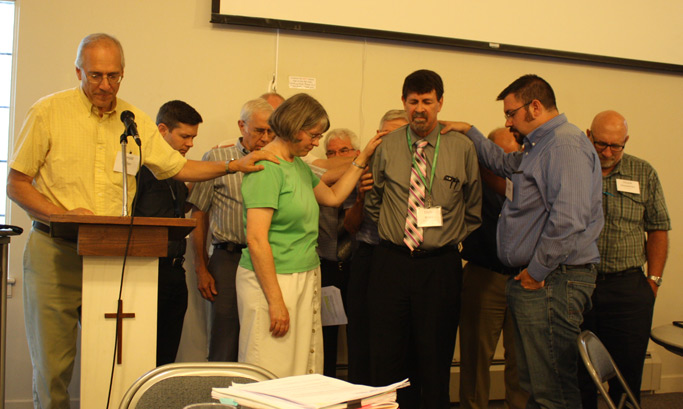