Moderator Elroy Miller and Executive Conference Minister Clyde G. Kratz reported about their ongoing work. Kratz gave an overview of his tasks, identified strategic leadership initiatives, updated members on the Polity Task Force’s work; and reported from Mennonite Church USA Convention, on the work of the Ministerial Investigation Team, and about his sabbatical plans. Miller reviewed a proposed revision to the Conference mission statement, which was approved in the following session and is now ready for delegate vote at the winter session in February. To pass, Council voted that a two-thirds majority affirmation will be required. (Delegates passed the vision statement during Summer Assembly 2017.)

At the recommendation of Eastern Carolina District, Conference Council approved, with regret, Chapel Hill Mennonite Fellowship’s and Raleigh Mennonite Church’s decision to withdraw their membership from Virginia Mennonite Conference, pending, and contingent upon, their acceptance into membership of Central District Conference (CDC). Chapel Hill and Raleigh await acceptance from and transfer into CDC, a year-long fellowship relationship, in keeping with CDC’s standard practice.

James Musser, Chair of the Congregational Life Commission and retired minister from Stephens City, Va., reported that the Commission is focusing on ways to increase youth ministry at the Conference level, better networking among congregations, and making resources more readily available. 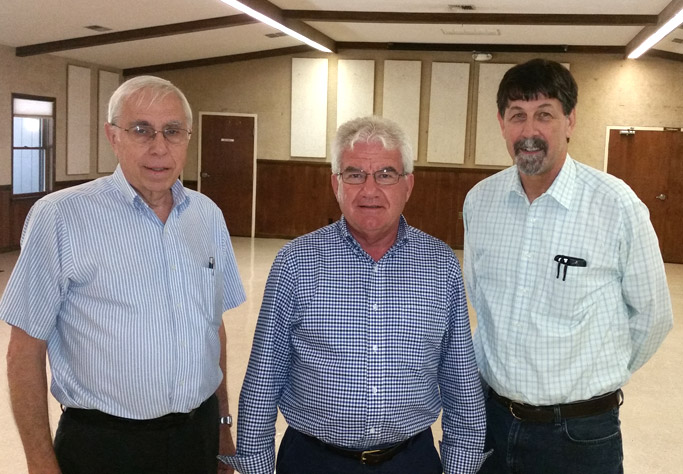 Ideas for the future of credentialing
Faith and Life Commission (FLC) desires increased transparency and increased delegate involvement in the conversations surrounding its work, and will publish regular news releases from meetings.

Ideas and questions emerged from FLC Chair Patsy Seitz’s report. She noted that FLC has empowered the Credentials Committee (FLC chooses the membership) to approve ministerial credentials. FLC also has the duty of identifying the credentialing certification (in keeping with A Shared Understanding of Church Leadership and The Confession of Faith in a Mennonite Perspective) and recertification procedures. Mennonite Church USA completes a policy background check as part of the Ministerial Leadership Inventory process.

Council members discussed potential changes in the credentialing process: Mennonite Church USA has identified six competencies (skills) that credentialed leaders should exhibit, and provided a reading list under each competency. VMC added ethics to that list. FLC is considering a requirement that all credentialed leaders complete continuing education, reading or formal training, in each of the seven competencies, and considering recertification, over a two-year timeline, for each leader, and recertification every five years after that.

“Healthy Boundaries: Fundamentals” is now required training, and meets continuing education within the ethics competency. Leaders have two years in which to complete the training, which is being scheduled in each district and cluster. Harrisonburg District and FLC members have already completed it. Congregational leaders are also strongly encouraged to attend. There is a $50 registration fee (includes a workbook), but the training addresses boundary crossing and violations, a major issue throughout Christianity and the entire religious spectrum.

Some themes emerged: clarifying the reporting process for complaints, including complaints of abuse/sexual abuse; working at healing for all parties (alleged perpetrator, victim, and the community); and communication tools that encourage all leaders to attend ethics training.

Churches and religious agencies face increasing pressures, including the potential of civil and criminal liability, to prevent misconduct, and to write legally and agency appropriate procedures and processes for handling complaints. While the Commonwealth of Virginia does not mandate that clergy report misconduct, an increasing number of states do and VMC member congregations in other states may. Pastors’ ethical standards should demonstrate best practices to maintain and build community and foster public trust, both in the way they follow policy and procedures when misconduct is alleged, and in the way criminal behavior is reported.

Other reports and actions
Scott Beachy, Conference Treasurer, updated the Council on VMC’s financial picture. For fiscal year 2016-2017, contributions from individuals were down, but congregational giving was better than expected. Endowments provide significant grant funds for VMC leaders. Council approved the 2017-2018 financial mission of $256,690, and noted that the plan includes a $19,000 deficit that will be cared for using reserve funds. Costs for professional review of procedures and policies, and for initiating the Healthy Boundaries training are one-time events causing the anticipated deficit.

Jonathan Barton, General Minister of the Virginia Council of Churches (VCC), shared greetings and a report. He stated that division leaves the integrity of our witness at stake. He invited congregations to come together, where “[o]ur unity shows in integrity,” he said. VMC has not joined the Virginia Council of Churches, but Clyde Kratz has participated and will attend two events in November and December. Kratz shared that he always informs Conference Council or its officers of any statement or action that VCC proposes before signing on.

VMMissions sought counsel regarding board representatives to Council. At Assembly 2017, delegates approved the two new VMMissions board members, one of whom is not a member of a VMC congregation. The Bylaws requires VMC membership for Conference Council members. After considerable deliberation, Conference Council passed a motion requesting that Virginia Mennonite Missions appoint a VMC member to represent the board at Conference Council.

Conference Council meetings consist of more than just deliberation and voting on items listed on an agenda. Members also surround VMC leaders in prayer. On Friday, Shawn Manning, the new board chair of VMMissions, led a prayer of encouragement and blessing on VMMissions President Aaron Kauffman. On Saturday, Michael Shenk III, surrounded by the members of Council, led a prayer of blessing and sending for Clyde Kratz as he begins his sabbatical respite and for Interim Conference Minister Gordon Zook’s leadership.

Conference Council adjourned the meeting in faith that God will continue to lead the Conference, its leaders, and its people.