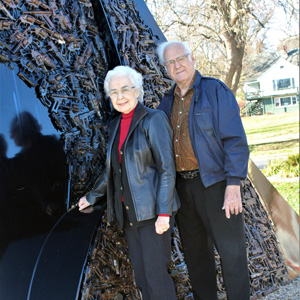 December 18, 2020
by Jim Bishop
Freelance writer based in Harrisonburg, Va. 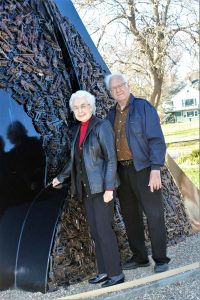 Myron and Esther Augsburger with Esther’s sculpture, “Guns Into Plowshares,” on the Eastern Mennonite University campus. (Photo by Jim Bishop)

Myron Shenk Augsburger and Esther Kniss Augsburger are only slowing their fast pace long enough to celebrate 70 years of married life. The couple was married Nov. 28, 1950 in Elida, Ohio, the ceremony postponed two days due to a raging snowstorm.

Seventy years later, Myron and Esther are again battling elements of a different nature from their Park Gables apartment at Virginia Mennonite Retirement Community. In between, they worked as a team, sharing their myriad gifts with the global community – Myron as a college president, evangelist, theologian, pastor and author of 15 books; Esther as an art teacher, artist-sculpturer and organizer of international conferences for Christian artists.

Together they raised sons John and Michael (deceased), and a daughter, Marcia.

Esther and Myron met after Esther’s family returned from missionary service in India and moved to Elida, where Myron lived.

“We had our first date when I was 15,” Esther recalls, “but my parents said ‘no more’ until I’m 16, and then only once a month for another year.” But they managed to sit together on the school bus every day and went ice skating after school.

The couple dated almost four years before marriage – snow joke, if you get my drift. They were living in a mobile home in Elida when Virginia Mennonite Conference asked them to pastor a new church, Tuttle Avenue Mennonite, in Sarasota, Fla.

“We headed for Florida in our ‘rumble-seat’ Pontiac with all our possessions inside or on top and $100 to our name,” Myron recalled. After serving there five years, then Eastern Mennonite College President John R. Mumaw contacted Myron to come there as campus pastor, where he served six years and as president 15 years.
Myron earned degrees from EMU, a masters in divinity from Goshen (Ind.) Biblical Seminary and a doctorate from Union Theological Seminary, Richmond.

Myron was inaugurated as EMU’s fifth president in 1965 at age 35. He oversaw a significant period of growth in enrollment, innovative academic programs, campus facilities and intercollegiate athletics. He had already taken a position as an evangelist with InterChurch, Inc., where he preached in city-wide meetings across North America until 1996, at times drawing as many as 7,000 people.

In 1971, Augsburger joined with other college presidents to found the Christian College Consortium. He later participated in the founding of the Council for Christian Colleges and Universities and served as president of that organization seven years.

In 1972, Myron pursued a vision to start “a new Mennonite presence” at the corner of Green St. and Chicago Ave. in Harrisonburg after the former Green Street Mennonite congregants left and formed the Harrisonburg Mennonite Church on Rt. 42 South. A small group emerged to become Community Mennonite Church, which outgrew that facility and moved in 1989 to its present location at 70 S. High St.

That wasn’t the couple’s only involvement with “church planting.” In 1981, Myron and Ester were asked by the former Mennonite Board of Missions to start a church in Washington, D.C. The church they founded on Capitol Hill, Washington Community Fellowship, continues to this day. Myron remained on the pastoral staff there until 1987.

After their children were in school, Esther took classes at EMU, majoring in voice. But, she noted, “Myron kept reminding me that my first love is art. At the time, artists were largely suspect in the church, and I was afraid of criticism. But he convinced me to change my major from music to art.”

Esther received the first degree in art that EMU awarded in 1972 and a master’s degree in art from James Madison University in 1978. She taught art at Eastern Mennonite High School, 1971-80 and at Georgetown University in 1984. She organized art conferences in several Asian countries and in Eastern Europe every two years until they moved to VMRC in 2019.

Esther honed her artistic craft with a focus on painting, ceramics and sculpture, both free-lance and commissioned works. Her favorite pieces are “Summit,” “Seeds of the Gulag” in Siberia, Russia, and “Guns Into Plowshares,” which she created together with her late son, Michael in the early 1990s.

The 16-foot-tall, four-ton sculpture, which contains more than 3,000 handguns collected from the streets of Washington, D.C., was originally located outside the D.C. police department headquarters. It moved to the EMU campus the fall of 2017.

Asked their “secret” to a long-term marital bond, Myron replied: “We’ve sought to encourage and support each other’s gifts. We encouraged each other’s’ many travels, even abroad; some we did together – leading tours and other activities – and sometimes alone.”

“Being together at VMRC is so wonderful at this life stage,” Esther added. “We’ve been blessed with good health and the ability to stay active. However, we now wish we would have spent more time together with our children during Myron’s presidential years at EMU.”

“I’m still working in Myron’s messy kitchen after he bakes his wonderful ‘Shooberry’ pie,” Esther smiled. “Once this pandemic lifts, we still hope to travel as we are able to encourage the many churches and artists in Asia and Europe.”

Just goes to show you can’t slow a good couple down.

This article appeared in the Daily News-Record, Harrisonburg, Va.