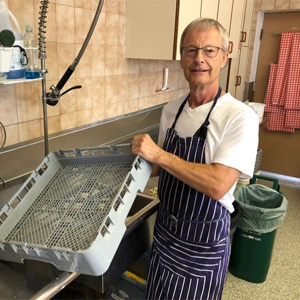 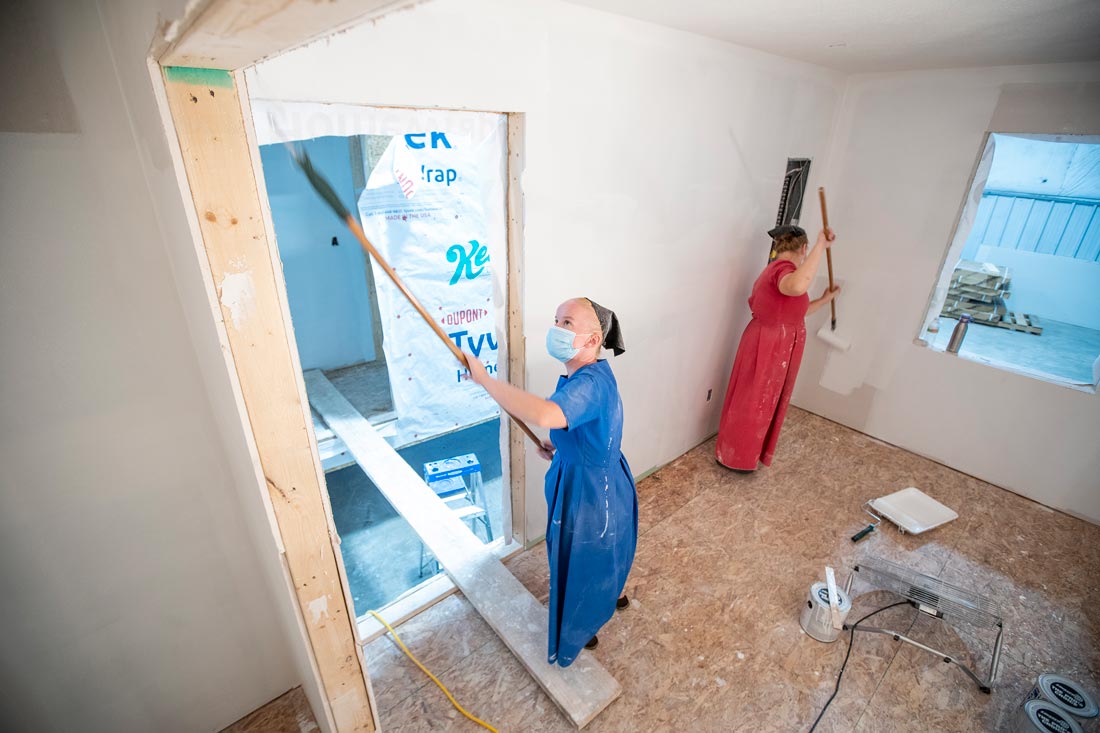 Abigail Barkman (l) and Linda Hershberger (r) work on a modular home in Ohio for a new homeowner in West Virginia. Photo courtesy of Jesse Huxman

When your organization is best known for doing things like bringing volunteers together from all over North America to build and repair houses for survivors of disasters, what do you do when you can’t do that?

That was the situation Mennonite Disaster Service (MDS) found itself in last March when the pandemic struck.

In mid-March, as the U.S. and Canada began general shutdowns, the organization closed all of its projects in Texas, California and the Gulf Coast and sent all volunteers home. A week later it suspended all of its summer projects, too.

At the time, MDS executive director Kevin King acknowledged the decision was difficult—so many people were depending on it to get back home—but the right one to make.

Looking ahead, the future for MDS was unclear for 2020. “Only God knows what will happen,” he said. “We hope we can resume again in fall, but nothing is certain. The only thing I know for sure, as the Psalmists put it, is “God is our refuge and strength, a very present help in trouble.”

God’s strength and help was evident as MDS, through its regions and units across the U.S. and Canada, creatively found ways to pivot away to new ways of responding to help people caught in a disaster—this time the disaster of the pandemic.

One of the first ways MDS responded was by providing assistance for local congregations.

In the U.S., the organization teamed up with Mennonite Central Committee and Everence, which offers banking, insurance and financial services, to create the COVID-19 Congregational Relief Fund.
The Fund, which was designed to help churches deal with critical financial challenges due to the pandemic, provided $800,000 USD to 159 congregations.

“Collaboratively, we assisted churches that might not have been able to recover from this global emergency,” said King. “We particularly wanted to support racially and ethnically diverse churches with historic roots or relationships with the Anabaptist faith community, serving in historically under-resourced communities.”

One of the churches that received help was Evangelical Garifuna Church of Manhattan, a Mennonite congregation in New York. The church used money from the Fund to provide groceries for people who attend the church of about 200 regular attenders, and others in the community.

But with strict stay-at-home orders, layoffs and reduced hours due to the pandemic, more people found now find themselves struggling to make ends meet. Adding to the stress, people who are undocumented are wary of accessing public services and resources like food banks, food stamps and other relief programs out of fear of being turned away or deported.

“For some people, this difficult situation just brings back the trauma of immigrating here,” he said, noting the Fund helped the church respond to various needs. 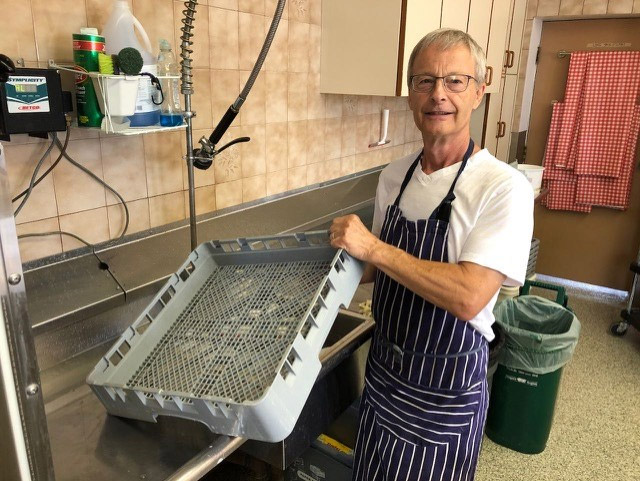 Bob Ratelle does clean up in the kitchen at Scott St. Church in St. Catharines, Ont., after making meals made possible by support from the MDS Canada Spirit of MDS Fund. Photo courtesy of Jesse Huxman

In Canada, MDS created the $100,000 Spirit of MDS Fund, which offered grants to congregations responding to COVID-19-related needs in their communities.

“It was our privilege to come alongside Canadian churches to help them serve people impacted by the pandemic,” said Ross Penner, who directs MDS operations in Canada. “Due to the virus, we were unable to do our work as usual in Canada, but we could still help people through local congregations.”

Altogether, MDS Canada distributed the money to 80 congregations for various programs. One of the churches that received the money was Scott St. Mennonite Brethren Church in St. Catharines, Ont.
The money from the MDS Canada Spirit of MDS Fund was “a great encouragement to our congregation and a catalyst for ministry,” said pastor Rob Patterson, adding it “made us feel that we are part of the larger Mennonite cause, both in St. Catharines and around the world.”

The church used their grant to provide 500 nutritious meals for families experiencing food insecurity due to the pandemic.

“Our volunteer kitchen staff have been working hard and safely in this era of COVID,” says Patterson. “The MDS Canada grant allowed us to get the program up and running, helping with food purchasing and promotion.”

In addition to food-related programs, other ways churches used grants included upgrading technology so more people could participate in worship services; buying tablets for a senior’s residence so residents could interact with their families; purchasing PPE for various ministries; and supporting programs that assisted homeless people.

In addition to these two Funds, MDS supporters in the U.S. and Canada made thousands of masks for various ministries and groups. In Pennsylvania, some supporters organized a special silage drive to help farmers struggling as a result of drought.

Volunteers in Minneapolis also helped storeowners in that city clean up after protests resulted in damage and responded in Iowa following a severe windstorm.

One unique COVID-19 related project was building two 1,000 square foot modular homes inside a warehouse in Ohio. They were then transported to West Virginia for new homeowners.

With larger traditional MDS projects closed because of the COVID-19 pandemic, more than 80 volunteers found an outlet for service inside the 30,000-square-foot warehouse where they could socially distance, wear masks and open the large doors for ventilation.

Lynn Sheer, one of the homeowners, was simply overjoyed. “They are the most kind people,” she said of the volunteers who built her new house. “I cannot believe the goodness of what they are doing for me.”

At 70 Mile House, homeowner Jim Brown receives a Bible from volunteer Shirley Goetzke while both are socially distanced and masked. Photo courtesy of Jesse Huxman

As the pandemic continues, King invites people to pray—for MDS, and also for other Mennonite organizations, denominations, schools, churches and other groups dealing with the challenges posed by the virus.

“Pray also for the leaders of the U.S. and Canada, and all who are involved in health care in any way,” he said. “It is a difficult and challenging time for everyone. And continue to remember that God is our refuge and strength, even during a pandemic.”