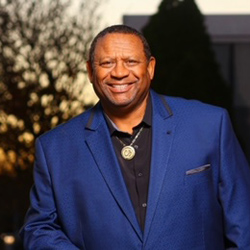 Have you ever thought about what it would be like to see the world through the eyes of a melanated person? What if you woke up tomorrow as a person of color. Would you choose light brown, medium brown, or black skin? If you had no choice in your skin pigmentation, how would your life change?

Systemic racism is an undercurrent that is easily dismissed by many in the majority culture. It’s like the idiom of an ostrich with its head in the sand as if to say, “If I don’t see it, then it must not exist.”

At an early age I never really saw a gap between black and white. Even though I grew up in a black low rent housing community but attended a racially mixed church, it all seemed normal. Monday through Saturday I was in an all black environment, but on Sunday I experienced an integrated church.

My early encounters with racism came as a result of seeing my father go to the back door of a restaurant to pick up food because blacks were not allowed to enter through the front door. At the time, this was normal because it was my paradigm and all I knew. Elementary school was an eye opener because in grade 4, I was moved to an all white school due to integration. This was not as difficult for me as it was for some of my other friends because I was accustomed to white friends on Sundays and this was not a terribly difficult transition for me.

My rude awakening to the racial divide came when I was around 10 or 12 years old. One Sunday, most of my whites friends in our racially mixed congregation didn’t come back to church. I never saw them again after that Sunday. There was no explanation — they just never came back. Their parents returned but they were never seen again. Later I learned that this practice was to keep white children from developing relationships with black children for fear that they may start having a fondness for one another or God forbid become boyfriend and girlfriend.

Life has an Interesting way of maturing us. As I grew older, I began to experience the difference of being a melanated individual in a white church.

Mennonites have told me they admired my accomplishments but could never join my church because something inside of them would not allow a black man to be over them. They could come and assist but never join a church with a black pastor or leadership team in place. This helped me to understand a dilemma that confused me for decades, and answered the question looming in my mind as to why the majority of the white people left Calvary when my father became the senior pastor.

Do I still feel the weight of being a melanated person? Yes I do, every single day. I am not just a man but a black man, and so I deal with DWB (driving while black), being followed in stores, being racially profiled, feeling the isolation in white majority board meetings, and the awkwardness of break time and lunch times when friends and family members huddle to talk about being Mennonite and their commonalties. I am inwardly conscious of who and where I am and how I appear. I realize that we have come a long way as a society and as a church, but we have not yet arrived.

In our pluralistic society, we struggle to find definition and identity. We debate, argue, investigate, process, and choose who’s right and who’s wrong. We join, we separate, we tolerate and even obliterate one another all in the name of the Prince of Peace. The question remains: how do we remain true to our faith, our Christian commission and to our God, the creator of All humankind?

Francis Schaefer said, “If we do not show love to one another, the world has a right to question whether Christianity is true.”

Imagine tomorrow that you woke up black. How different would your life be?

In my role as Minister of DEI, my hope is to help us to see each other as if we were in the other person’s shoes. What if?